So... You Think Your Bike Fu Pretty Good? 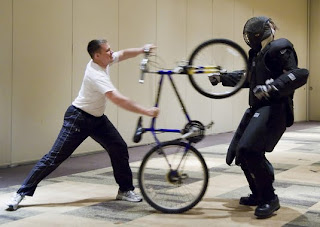 I've had a lot of quackpot theories in my life, just ask my wife and family.  Better yet, don't ask them, you don't have that kind of time. Trust me.

But I was walking out of my lunch location of choice today when another one occurred to me.  I realized that my senses are on nearly full alert every time I walk somewhere, no matter what my sleep condition (and today it wasn't good).  When I walk through my office, I immediately slow down and take corners slowly, with an eye toward blind spots and the like.  I watch out of the corner of my eyes when walking down the street, looking around corners and scanning for obstacles that another pedestrian might suddenly appear from behind.  And I find myself in a sort of hyper-aware mode in the grocery store - never pushing my cart out too far into an "intersection" between aisles, and trying to figure who has the real de facto right of way at the end of aisles.

I chalk this up to regular bike commuting.  And it reminds me of a sort of sense of awareness that came with the territory when I was taking Tae Kwon Do back when I was in college.

Bear with me here, folks.

If you've ever taken a martial art, or competed in wrestling or something similar, I think your senses and your brainwaves start to attune themselves to you new activity in ways that don't seem particularly apparent all at once.  Such activities put your senses on alert - keeping you aware of things all around you in a way that benefits that activity.  When you're trying to stay sort of generally focused on an opponent, as you are in a martial arts class, or a boxing or fencing match, or what have you, you develop a radar for what's going on around you.  And that's not to say that you're turning into Jean Claude Van Damme in Bloodsport, where his instructor throws a blindfold on him to raise his senses or anything like that.  But the regular practice of such activities has an effect on your perceptions.

Now I haven't been in a martial arts class regularly since my sophomore year of college, which was... well, longer ago than I care to admit.  But as I was walking today, it felt the same.  And the major activity that I have each day is my bike commute.  In a lot of ways, a bike commute is the same as a martial art.  You're constantly scanning and looking for hazards.  You're watching the road ahead of you, and scanning behind you as you pass parked cars and try to judge when you should get over safely to avoid being stuck in the wrong lane.  You see pedestrians as they are starting to try to step off the curb and jaywalk in front of you because they don't see you coming.  And you're scanning for road debris at the same time to avoid having to swerve at the last moment as sometimes happens.

I'm not saying that I reached any sort of moment of zen or anything like that, it was just a realization that my bike commuting has changed my perceptions for the better.  And I think cycling does that more than other forms of exercise does.  Running doesn't move quite as quickly and you have more time to react to things. Swimming does the opposite - you spend all your time going up and down the lane and losing a lot of your awareness in a sort of stupor (trust me, I swam competitively for a good decade).  But cycling forces  your mind to be more sharp and aware.

Activities like this have got to be good for you on a level even higher than building cardiovascular fitness.  And I think this is part of why cycling gets to be so attractive to people - they subconsciously realize this and try to attain it even more as they go out on their daily rides.

So what do you think? Has cycling changed your awareness and perceptions for the better?

People, not speed.
Couldn't Pass It Up The Cycling Soapbox The Health Factor