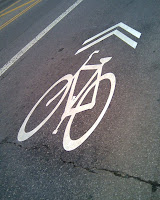 We have our sharrow in Columbus. Well, we have one marking, but you have to start somewhere.

Yesterday, at the Bike To Work Week Launch event at the South Campus Gateway, Mayor Coleman unveiled the first sharrow marking for the city.  The sharrow will run from Morse Road to Nationwide Ave. in the Arena District.

Which raises the question.... that's great.  But what are they going to do with the cars that are parked on High Street in the Old North Columbus and Short North areas, where recessed parking does not exist?  If you're going to create a marked bike route in an attempt to create a safer way for people to travel by two wheels and no motor, it seems logical that you'd want it to be... well, safe.

But having a sharrow with people parked in it? Assuming that the sharrow is going to be in the right lane all the way down High Street, and I can't imagine that they'd put it in the left lane, you're going to have to deal with lots of parked cars - especially during afternoon rush hour, when the roads are trickiest.

So what's the plan?  Anyone know?  Are they going to remove street parking along the sharrow?  Or is this sharrow just for looks and political cred?

People, not speed.
Bike To Work Week Couldn't Pass It Up Planning For Cycling The Cycling Soapbox