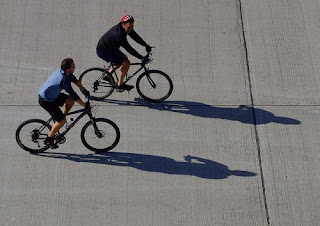 You don't see a lot of cyclist deaths in Columbus. It seems I've read about cyclists being killed by motorists on almost every cycling blog I read but it's never happened here, since I started paying close attention.

Well, that all changed Wednesday morning at just before 4:00 am, when 19-year-old cyclist Michael T. Sonney was killed by a hit-and-run pickup driver on Snouffer Road in north Columbus. Here's the story from the Dispatch:
Bicyclist killed in hit-and-run accident on Northwest Side Wednesday, July 25, 2007 11:02 PM By Theodore Decker and Lindsey Seavert
The Columbus Dispatch - WBNS-10TV

A bicyclist killed when he was hit on the Northwest Side early this morning was on his way home from a new job, his family said. The family of Michael T. Sonney told WBNS-TV (Channel 10) that he'd just bought the bike with the first paycheck he earned at Teleperformance, a call center.Sonney, 19, died shortly before 4 a.m. after being hit on Snouffer Roa…