We've spent the past couple of weeks talking about what you can do to get ready for autumn riding. Two weeks ago, we discussed everyday gear and last week we featured foul-weather gear.

This week, we're going to talk about another important part of your commute: your bike. That's right, now that we've gotten you ready to deal with the elements, it's time to do the same for your bike. In particular, we're going to discuss Fenders and Lights.

Some folks eschew fenders due to the perceived weight, mainly folks who do a lot of recreational riding or race training. But for the commuter, nothing makes it easier to simply get on your bike and go, no matter what you're wearing, than a serviceable set of fenders.

I still remember my very first commute to work - it was mid-November of 2006, and I had this brand new bike to head to work with. So I threw my backpack on, tied up my pants cuffs, put on my helmet, and took off. It was a somewhat cool, humid day. It had rained the previous day and there was still a little bit of standing water here and there, but most it was just wet pavement without standing water. In other words, I could avoid going through the puddles.

Upon getting to work and sitting down in my chair at the office, I felt a wet spot on my chair. So I headed off to our bathroom to take a look at it. And lo and behold, I had a nice little wet stripe going right up my butt where the spray from my rear wheel had gotten me. Even though I took care to avoid the standing water, just riding over the wet pavement had thrown up enough water over a couple miles of riding to make its presence known.

I looked online, and lo and behold, I found the answer: a pair of fenders. I've had them on my bike ever since and I rarely have any issue with them. The brand I use personally are Planet Bike Hardcore ATB Fenders with Mudflaps. (No Yosemite Sam on the mudflaps yet, though I've been tempted to find some that say "Back off!" like you see on some trucks). They're built wide for tires that are wide, like mine (26" x 1.95" tires). 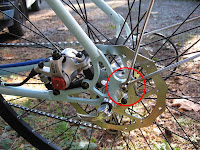 These fenders were easy to install with a screwdriver and small crescent wrench (no special tools required), and most bike frames seem to

have the mounts for them (or similar fenders) built right in (as you can see in the example picture on the left).

The mudflaps on this model (and they also come in a narrower, roadbike/hybrid-tire model

in case your bike isn't quite the same as mine) are great for group rides, as well - they'll avoid spray flying up and hitting people riding with you, which your compatriots are sure to appreciate. 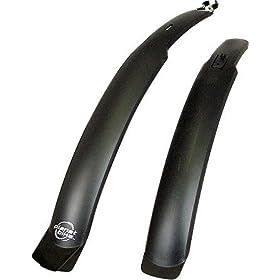 Another fender model that you'll see on occasion doesn't attach to the frame at the hubs, but rather to the seat post or seat tube. You'll notice the clip on the fender at the right for that very purpose. They are lighter and easier to install, but don't quite protect everyone around you as well as the model I use. Planet Bike has these as well.

The other facet of riding in the autumn is the shortening of the daylight hours. That's right, you're likely to be riding more when the visibility is bad - whether because of reduced daylight or increased rainy periods. And to that end, nothing is better for seeing the road AND being seen by everyone else than a good set of lights. And it bears repeating that Columbus Traffic Code requires you to have lights when riding in less than optimal sunlight.

For seeing the road, you'll want a good headlight. There are a lot of great bike lights on the market, with companies like CygoLite, Cateye, Planet Bike, and others making fine models. They can run a bit expensive, but you can find them for around $100 with rechargeable batteries (so that you save even more money by not having to keep buying batteries!). I personally prefer a double-light set up - with one light pointed close to the ground in front of you and one a bit ahead. That allows for the best visibility of the whole road in front of you. The model I use is the CygoLite Rover II LED. I've never had an issue with seeing the road when using this light.

Most lights attach to the front of the bike, either on the handlebars or the head tube. But there are also attachments that can put your light on your helmet. These are nice because you'll always see what lies ahead of you in the direction you're looking. A good example can seen here: the Cygo Bicycle Light Helmet Mount Kit for Rover/Night Explorer

. And if you think a vehicle isn't paying attention to your approach from the opposite side, you can nod your head or wave it from side to side to get the attention of drivers. You can also do this with handlebar-mounted lights by slowly turning the bars back and forth, but obviously you need to be careful with this.

For being seen on the road, you'll want blinking lights to catch drivers' attention. And for me, nothing beats the most low-maintenance bike light there is: the Reelight. You may recall the review I did of these back in February 2008. These little beauties are great because they're bright and require NO BATTERIES. They charge themselves on a set of magnets that you'll install to your spokes on the front and rear tires, and every time the wheels revolve they charge the light. And once you've been going for a while, they'll HOLD that charge even when you're not moving, more than long enough to get through a traffic light. They are also easy to install, and all the hardware is included.

Naturally, there are also many battery-powered lights of various types that fulfill the "flasher" requirement for visibility on your bike. It's a matter of personal preference.

So as you can see, there's no reason whatsoever that you can't remain comfortable and safe while you ride in the fall and even into the winter (which we'll get into in a couple of months).

For those who are still looking around, I've added a foul weather accessories page to my Amazon Store. Please consider Bike Commuting in Columbus when you're looking for your fenders, lights, or other bike gear!