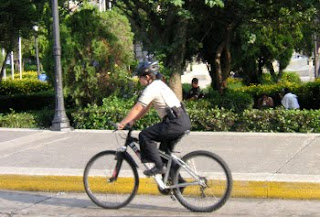 http://www.flickr.com/photos/blmurch/ / CC BY 2.0
In the past few days on our Commuting 101 series, we've discussed finding the proper bike, getting gear to make your ride more effective and easy, how to dress for safety and comfort, and how to get cleaned up once you get to work.

Today, we'll address what you need to know for actually riding the road in our first of two parts about the local cycling laws in Columbus.

First, let's reiterate that this is information that is specific to Columbus, Ohio.  Your local laws may vary if you're riding in another community.  It's recommended that you do an internet search for "bicycle traffic code" and your city's name if you're interested in finding these laws yourself.

Let's get started.  First, the Columbus Traffic Code is available on the internet and is easy to navigate, thank goodness.  The Traffic Code is Title 21 of the Columbus, Ohio Code of Ordinances, and bicycling is addressed in Chapter 2173 - Bicycles, Motorcycles, and Children's Non-Motorized Vehicles.  The code was revised back in 2008 to make it more coherent and easy to read and manage, as well as get rid of some contradictory phrasing.

The code starts off with the following statement:


The provisions of this Traffic Code that are applicable to bicycles apply whenever a bicycle is operated upon any street or highway or upon any shared-use path within the public right-of-way as defined in section 910.01 (P) of the Columbus City Code or easement adjacent thereto or however specifically provided for in Chapter 2173.

So, anything that mentions bicycles specifically in this section of the code is applicable to anywhere a bike is operating in the public right of way - including shared-use paths (like the Olentangy Multi-Use Trail, for example).  Section 910.01 (P) defines the "public right-of-way" as:


"Right-of-way" means the surface of and the space above and below the paved or unpaved portions of any public street, public road, public highway, public freeway, public lane, public path, public way, public alley, public court, public sidewalk, public boulevard, public parkway, public drive and any other land dedicated or otherwise designated for the same now or hereafter held by the city...

So, for our purposes, this is any roadway in the city.  That's pretty simple.

Sections B, C, D, and E address some of the consequences of being accused of violating the traffic code.  B states that all the rules of vehicular traffic except for those that "by their nature" don't apply to bikes are to be followed by cyclists.  C addresses possible penalties such as tickets or summons which can be levied, though it does mention that cycling violations do not put points on a driver's license.

D states, interestingly, that a driver or cyclist who endangers the lives of others in the committing of an offense can be required to take a cycling course in addition to any other penalty, fine, etc.  And E states that the penalties mentioned in C and the possible course mentioned in D don't apply when the charge includes driving or operating a bike under the influence of intoxicants.  There are other more serious penalties for that.

Section 2173.015 simply defines some terms that don't apply to us, mostly - snowmobiles, children's non-motorized vehicles, and "operate." Operate simply means use a bike, for our purposes.

The next section, 2173.02, is concerned with things like passengers and safe use of a bicycle.  A cyclist must be on the bicycle properly, either sitting on or standing over the seat.  In other words, it's legal to stand up and pedal, but stay over the top tube.  And you can't carry anything with you on the bike that makes you take both hands off the handlebars.

You can't carry any more passengers than the number for which your bike is made and equipped.  In other words, if you have a kids' seat on the bike, that's okay -but having someone stand up behind you on the bike or sit in front of you on the top tube is illegal.

If you're under 18, you must wear a helmet and fasten the chin strap to be on a bike, whether as a passenger or the operator.

And section 2173.03 addresses attaching your bike to another vehicle.  Don't do it.  And don't let anyone on a bike or other vehicle do it to you! The assumption here, though, is that they don't mean attaching one bike to another - otherwise every bike trailer, trailer-bike, or bike on a tow bar is illegal.  I doubt that was the intent of the law.

Next time, we'll address the rest of the Columbus traffic code as it pertains to bicycles!