Tip of the Day: Getting Those Cars to MOVE

It's happened to all of us who ride the roads regularly - that well-meaning driver who interrupts the flow of traffic to try to let a cyclist turn left in front of them. Or they'll sit behind you for miles on a busy road, to "protect you from other cars." Or they'll sit at a four way stop and hold up traffic trying to get you to cross or turn first.

I don't know about you, but this is something that drives me crazy about drivers. Sure, they think they're doing the right thing and helping to keep cyclists safe, but frequently they don't realize that you're watching out for other things and their "help" isn't really helpful at all. In fact, it's frequently quite dangerous!

Here's an example: Part of one of my occasional routes is on Indianola just north of Hudson. Frequently, I get stopped going northbound at the traffic light at Arcadia (right next to the Dairy Queen). This is a four-lane road (two lanes each way) at the top of a hill, the hill sloping down to the north. I want to turn left onto Arcadia at this point. See the picture below, looking north on Indianola and crossing Arcadia. 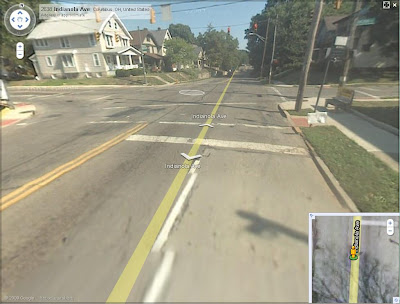 For some reason, this is a prime location for people wanting to let me cross in front of them to turn left onto Arcadia. And it's not always safe. If the car exhorting me to turn is an SUV or other taller vehicle, I can't always see if there's a car approaching in the oncoming curb lane. And what ends up happening is one of two things - either the cars behind the "Good Samaritan" start honking them to make them go, and they get frustrated with me and yell something as they go anyway, or they sit and wait until I go, even though I'd prefer just to let the flow of traffic work as it's supposed to.

The best way to handle this is to pretend like you haven't seen them waving at you. Take a drink from your water bottle. Fiddle with your gears. Look down the road as if you're trying to find something. Check your watch. Pull out your iPod and change the tune on it. Anything to make them think you haven't seen them.

If they think you haven't seen them, they're less likely to sit and wait for you to go.

Let me know how this works for you! And what tips do you have for people who find themselves in this situation?