Today, I was commuting down High Street as I normally do, taking the lane the entire way (for those who don't live in Columbus, High Street's lanes are not wide enough to share with a passing car). I ride from approximately Arcadia in Clintonville all the way down a few blocks south of the I-70 bridge.

I was coming down from the "cap" past the Convention Center and was almost to the red light (and it was red at the time) at Nationwide and High. It was at this point that a bus (#9527) decided that he had enough room to pass me and did so. Normally, not a problem. If someone wants to pass me then as long as they get over I have problem with that. 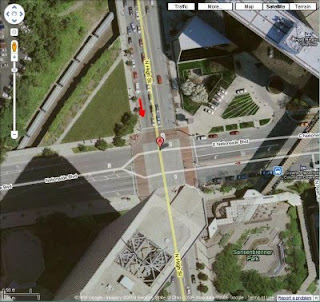 But this bus driver apparently had no clue how to do it properly. First, he jackrabbited past me and left me maybe two feet of clearance. Second, he cut back into the lane almost hitting as he did so in order to get to the light ahead of me. Third, there was absolutely no point in his doing so because as soon as we crossed Nationwide after the light changed, I passed him again as he stopped to drop off passengers in front of the Nationwide Building.

If you know you're going to be turning right at the next street, do you REALLY need to jackrabbit past that cyclist just to get in front of him? Or, if you're a bus, and you're making frequent stops, is it really necessary to fly past a cyclist just to get to your next stop? Or could you wait a moment longer to let the cyclist get past the stop? Is it really worth the five seconds you "save" to put someone's life in danger?

For those wondering, I have made a formal complaint to COTA about this driver, and I hope to hear a response, soon.