My son is at an age now where he's ready to start some real cycling. He has had a Specialized Hotrock bike for a couple years now (he's a big kid and outgrew tricycles pretty early in life), but he's always had some trouble with the pedalling action - trying to stand on one pedal and then not continuing the momentum to keep the other pedal coming around.

Well, we wanted to help him to get the feeling of riding the road even though his pedalling isn't superb yet, partcularly the balance factor of riding. Training wheels aren't the best way to do this, as many of you may know. They don't allow the rider to lean into turns and use their body to turn more than their hands.

And to that end, my wife and I were looking at various trailer-bikes - you know, those half-bikes that latch onto an adult's bike and basically turn your bike into a tandem. The rider in the rear can even "stoke" a bit - being pure power as you pedal up hills and the like.

But my son (who's slightly autistic, as many of you may know) loves his bike. And I was a bit concerned about him riding on something with which he's not familiar. I also didn't want to spend the money on a full trailer-bike. 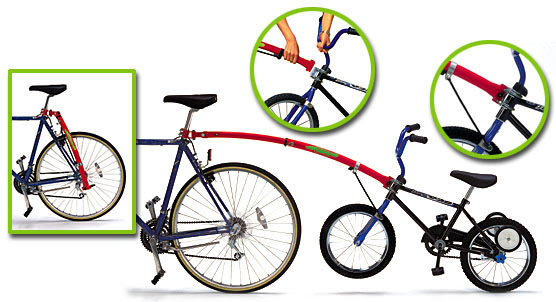 Basically, as you can see from the picture, it's a tow-bar that attaches from your bike to the front of your child's bike. It suspends their front wheel off the ground, fixes their handlebars in place, and allows you to tow your child on their existing bike. The child therefore gets to know the feeling of riding their bike, which is key in learning to ride alone.

When not in use, it telescopes closed and attaches in place out of the way to the left of your rear wheel (via a small attachment that fits under your rear quick-release). And you can also get optional training wheels for the child's bike that flip out of the way when you're towing, and flip back down if you want to let them ride unassisted.

Installation of the Trail-Gator is pretty easy, though there are some steps that are variably difficult depending on the type of bikes you have. But the instructions are pretty easy to follow.

The pieces that attach the bar to your child's bike are difficult enough to install that you probably want to leave the piece on the child's bike and buy another optional one in case you have two kids you want to be able to tow (Or you could just buy another Trail-Gator, I suppose, if you have two bikes that can do the towing as well). The piece that attaches to your bike is less complex - just slipping over your seat post and tightening with a wrench. But for convenience, you can also buy extras of those as well.

Once you get the pieces attached firmly and tightly, the ride is very smooth. Yes, you feel it if your passenger leans too far to either side but that's a good training tool, in my opinion. The tow-er knows when the tow-ee is not taking a good position on the bike that way. And also, the tow-er knows if the child isn't pedalling properly. If the child is trying to pedal backward, especially if the child's bike has coaster brakes, you'll know it... trust me. I disable my son's handbrake during our rides, but I like knowing when he's not pedalling right so I can remind him.

This item's great for family rides to the park, getting your kids to school (and allowing them to have their own bikes at school for the ride home if necessary), and even for longer-duration rides. My family has done some charity rides with me pulling my son and my wife pulling my daughter in a trailer and it's worked great. He's comfortable on his own bike, and if he wants to do some solo riding it's easy to disconnect him and let him go a bit.

So I give the Trail-Gator an A plus. It's a simple item that works well and has good flexibility to be used in a number of different ways.