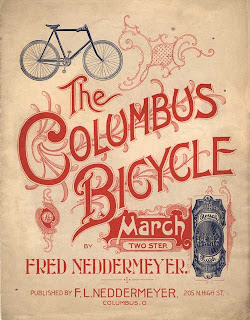 Several months ago, I found THIS image on the internet, but I have no idea what it's for. It appears to be for a song that a Fred Neddermeyer wrote here in Columbus, and I'd love to hear it!

It says "Two Step" on it, too... it may be a dance song. Here's some more information about these types of songs, apparently they were quite a thing back in the days of the League of American Wheelmen. Their PDF file on the release dates of these songs says it came out in 1897.

Does anyone know anything about this?

Edit: Looking around for information on Fred Neddermeyer, apparently he was a ragtime composer and band leader (for the appropriately named Neddermeyer Concert band of Columbus) around the turn of the 20th century.

He had a song dedicated to him by Karl King... also a bandleader of that era who played in Neddermeyer's band. It was called the "Neddermeyer Triumphal." He's mentioned in Ragtime: A Musical and Cultural History by Edward A. Berlin.

Now I really want to hear this song! It sounds like it could have really cooked!

Edit #2: Mr. Norman Batho of the League of American Wheelmen sent me a MIDI file of the March, and is going to get me a copy of the WAV file of it, too! So, for those of you who'd like to hear this little piece of bicyling Americana, here you go! It's easy to listen to this and imagine groups of people in the late 19th/early 20th century riding along on their pennyfarthings and safety bicycles, it's really a neat piece of nostalgia!

Many thanks to Mr. Batho for his contribution!

People, not speed.
Non-Biking But Interesting