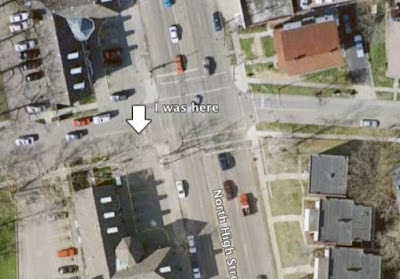 I've been out with the flu for a few days (no, I'm not oinking), and I missed this surprising post from Jeff Stephens of Consider Biking back on October 9th. Suffice to say that Jeff took some time to sit back and watch the behavior of our city's cyclists, and was dismayed at what he saw. I'm in complete agreement with Jeff on this issue. Simply too many Columbus cyclists do not obey the law. But let's look at the reasons that Jeff proposed in his commentary: Why are you riding this way? Are you so self-absorbed, that the world revolves around you? Are you just opportunistic since the bicycle gives you the opportunity to cheat traffic? Are you “expressing yourself” with your nonchalant coolness, hipness, whatever? Or, do you just not know any better? Do you just follow the example of the guy/gal in front of you because you’re new to urban bicycling? (I think it’s the latter.)Jeff's statement breaks the possible reasons for this behavior down into two extrem…

You don't see a lot of cyclist deaths in Columbus. It seems I've read about cyclists being killed by motorists on almost every cycling blog I read but it's never happened here, since I started paying close attention.

Well, that all changed Wednesday morning at just before 4:00 am, when 19-year-old cyclist Michael T. Sonney was killed by a hit-and-run pickup driver on Snouffer Road in north Columbus. Here's the story from the Dispatch:
Bicyclist killed in hit-and-run accident on Northwest Side Wednesday, July 25, 2007 11:02 PM By Theodore Decker and Lindsey Seavert
The Columbus Dispatch - WBNS-10TV

A bicyclist killed when he was hit on the Northwest Side early this morning was on his way home from a new job, his family said. The family of Michael T. Sonney told WBNS-TV (Channel 10) that he'd just bought the bike with the first paycheck he earned at Teleperformance, a call center.Sonney, 19, died shortly before 4 a.m. after being hit on Snouffer Roa…