Hi everyone, I'm your blogger here and thank you for taking the time to visit.

My Story:
I've been carless since 2004, when my wife and I moved to Clintonville and I decided there was no reason for us to continue to pay for two cars when I could get to work using the bus.  In November of 2006 I was given a bike for my birthday and started bike commuting later that month.  I haven't looked back.  I've found that I love cycling for transportation and that love led me to become a League of American Bicyclists Cycling Instructor in August of 2009.

I started Bike Commuting in Columbus in February of 2007 when I was looking around at the many local bike commuting websites from other cities and realized that there wasn't one for Columbus.  And I'd been blogging aimlessly for a while, so I decided to use my powers for good with this new blog.  And in February of 2012, on the more-or-less fifth anniversary of this blog, I changed the name to Carless Commuting as my focus shifted slightly.

After a few years of getting around primarily by bus and foot, I still have a passion for carless living. My family owns one car, primarily for my wife, and I still have the mindset of getting around without it. It's been one of the best things I ever did. Since that time this site has been sort of an on-again-off-again thing but carless commuting is still a big part of my life.

On the other hand, I am very much a big picture kind of guy. And looking around at the world, I see how the automobile has changed it for the worse much more than the better.

Yes, we can get around easily with cars, and people who would otherwise be isolated and immobile can get where they need to go.

On the other hand, I look so many of the problems in this country and think of all the people whose cars have enabled those problems.


I will not be so bold as to suggest that everyone just getting rid of their cars is going to solve all the problems of the world. But I will suggest that doing so can get people well on their way to solving those issues. It's done that for me and countless others.

At Carless Columbus, you're going to get advice, opinions, news, and hopefully some engaging articles about the topic of bike commuting and other forms of alternative transportation such as rail, bus, and walking.  Everything is based on my own experience as a non-cyclist becoming a transportation-based cyclist.  I'm not a recreational cyclist, though I certainly admire them and appreciate what many of them do for cycling.

I'm very opinionated and have tendency to "get my Irish up" about things when I see our streets and their designers being more concerned with speed than safety.  I'm a supporter of the concept of Complete Streets and believe that streets are for everyone, not just for cars.  Sometimes I'm not very patient with people who think that roads were built for cars instead of for people, and my writing will reflect that.  I make no apologies for that.  But I also have a sense of humor and hopefully my writing will reflect that as well. 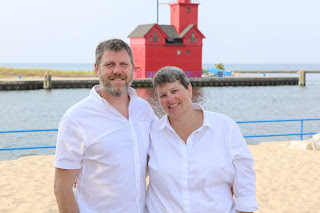 A little about myself.  As I indicated, I have an amazing wife named Jennifer, and we have two kids: Duncan and Moira. They are both the cutest kids in the world and I have photographic proof.

Duncan is autistic and helping him and my family to deal with that is a big part of my life. I'm a supporter of Autism Speaks, a charity to help raise funds and awareness about this condition, and hopefully help out all these kids who struggle every day with this condition.

I'm also very passionate about health and fitness, especially for people who are getting into their middle-aged years (I'm  50 myself). I follow a Paleo-type diet, and like to keep active with obstacle course racing (I've done at least two a year for several years and don't plan to stop any time soon). I keep everyone updated on all my activities and help other middle-aged folks to get their mojo back via nutrition, movement, and obstacle course racing at Mudlife Crisis.  Check it out!

I'm a computer geek by trade and somewhat by nature, but I also love the outdoors, reading, history, sports (I'm a big Notre Dame football and Columbus Crew fan), health and fitness, and a whole host of other stuff.

Thanks for stopping by today, and please feel free to contact me if you have any questions or comments!